St Etheldreda’s Choir is one of only a handful of fully professional Roman Catholic church choirs in the country, and has its origins in the choir of men and boys which Theodore Tanner directed from 1908 to 1948 and in the mixed choir of local singers who continued his work.

In the late 1970s, professional singers were gradually engaged and the Choir evolved into its present form. It sings the Latin Mass each Sunday morning at 11am and on major Feast Days and Solemnities, with a wide and varied repertoire ranging from plainsong and 16th century polyphony to music of the present day. 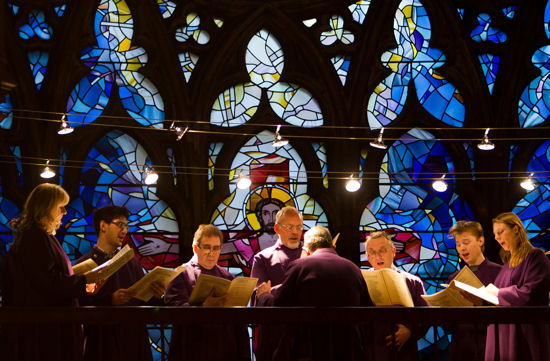 St Etheldreda’s organ was handmade in Switzerland by Spath Orgelbau, taking ten employees five months to construct. It was inaugurated in 2009 at a special recital by Dame Gillian Weir CBE.

The organ has 11 stops in the Great Organ, eight and a tremulant in the Swell, five in the pedal organ and three in the couplers. It is used primarily in the Sunday liturgy. According to organist Simon Lloyd, “Pope Benedict recently said: “The organ has always been considered, and rightly so, the king of musical instruments, because it takes up all the sounds of creation… By transcending the merely human sphere… it evokes the divine.””

If you would like to enjoy the music of St Etheldreda’s Choir in the comfort of your own home, CDs are available to buy online in our shop.

Today is The Ascension of the Lord